#1 Songs on the Moose Parade 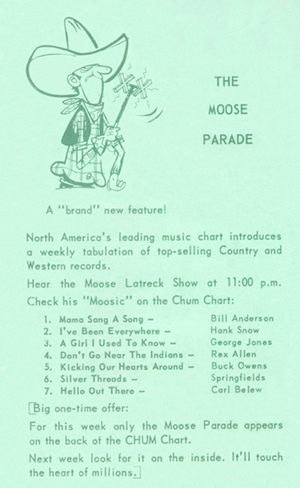 The Moose was loose at CHUM in the early '60s.

From 1962 to 1964, Moose Latreck - who by day was CHUM Production Manager Fred Snyder - did a late-night country music show on CHUM. The show spawned The Moose Parade, a listing of the top country songs of the week as compiled by Promotions Director Allen Farrell and Music Director Bob McAdorey. It debuted as a top seven list November 19, 1962, was expanded to a Top 10 ranking the following week, then was shortened to a Top 5 list beginning with the chart of May 27, 1963.

The Moose Parade disappeared after a final appearance on the chart of June 22, 1964. Latreck's country music show - the last of its kind at CHUM - was replaced by Larry Solway's talk program, Speak Your Mind. "Understand Your Man" by Johnny Cash holds the record for the longest stay at #1, 11 weeks from March 9 to May 25, 1964.

Snyder left CHUM in 1966 for country-formatted CFGM Richmond Hill, Ont., then moved to newly launched Toronto station CHIN the following year. Snyder spent 33 years at the multi-cultural outlet as production manager, retiring in 2000. In 1980, Moose Latreck returned to the airwaves with a weekly show on CFGM called "Saturday Souvenirs." The show lasted a year. Snyder died June 22, 2006, the 42nd anniversary of the last appearance of the Moose Parade on the CHUM Chart.