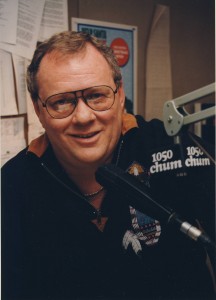 From his first day at CHUM in 1977, Brian Henderson was known as ‘Henny’. Growing up in Toronto, Henny discovered CHUM and ‘teens’ DJ Dave Johnson early on – 1957 to be precise, when Henny was 12. He became an avid CHUM listener and even practiced being a DJ himself.

Henny recalled those heady days (courtesy of Dale Patterson's rockradioscrapbook.ca): “Jay Nelson was there then, [as was] Terry Steele, John Majhor, John Gilbert, Roger Ashby, J. D. Roberts…and working in the chair next to me, Dick Smyth, the best radio news writer, reader, commentator ever. Dick Smyth left CHUM in 1987 and I accepted an offer to take over the news and sports commentary, which became not only an opportunity to vent my opinions, but to relate interesting stories and offer some insight into the most personal elements of my life.”

Henny occasionally got into trouble with a few of his commentaries, but he weathered most of those ‘topical’ storms (usually with the help of CHUM’s Allan and Jim Waters) and continued to speak out on matters that interested him.

Prior to the launch of CHUM’s sports format (The Team) in May of 2001 and after its demise in 2002, Henny In The Morning (along with sidekick/traffic reporter Nanci Krant, producer/board operator Doug Kirkwood and newsman Doug Beaumont) entertained Southern Ontario in a uniquely entertaining way, even as Henny’s health deteriorated. He survived several heart attacks as well as several serious bouts of cancer.

Henny was terminated from CHUM in November of 2004 after 27 years at 1331 Yonge Street.

Brian Henderson remains, as of this writing, happily retired from radio.