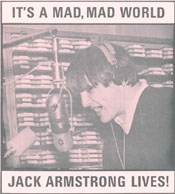 Ask me who my favourite Top 40 jock is and you'll get a quick answer.

The man once recognized by Guinness as the world's fastest-talking human first came to this lifelong Torontonian's attention in 1967 when I heard him doing the evening show at WKYC Cleveland. I couldn't believe my ears - here was a jock who talked a mile-a-minute, hit every post in sight, and did it all with personality, humour and an obvious love for the music. This was a guy born to be a Top 40 jock and I loved him.

So imagine my surprise (and pleasure!) when I heard that Armstrong was coming to CHUM! His debut was on a Sunday night in June 1968 and I remember listening to that very first show with amazement at my grandparents place. I was dazzled, but don't take my word for it: listen for yourself here).

After that, you'd think I'd be listening to Armstrong on CHUM every night, but I didn't, I couldn't! The family moved to Ottawa for the summer and, since I couldn't hear CHUM, I spent most of that summer discovering Cousin Brucie, Chuck Leonard and Charlie Greer at WABC, and sampling some of the local stations like CFRA (which only played rock 'n' roll at night in those days). Not a bad substitute, but nothing could take the place of Jack Armstrong at CHUM. 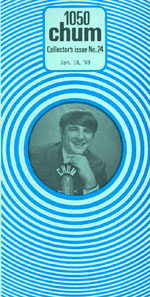 Imagine my surprise when the family returned to Toronto in August and I switched on CHUM. Bob McAdorey was gone, as were John Spragge and Duff Roman. Bob Laine was on mid-days, after a decade on the all-night show. Brian Skinner was demoted to the all-night show! Was nothing sacred? The station sounded, well, different. It was more music intensive, more streamlined, and less personality oriented. Yes, Jack Armstrong was there in the night-time, and the wonderful J. Michael Wilson could be heard in afternoon drive. For me, CHUM was never the same - to this day I still prefer the pre-August 1968 CHUM. But I kept listening right up to the end of the station's music era in March 2009.

Jack's time at CHUM was short: he left the station in February 1969 after just nine months. No more Jack! I was devastated. I heard he had gone to WPOP Hartford, but despite best efforts couldn't pick up the station. Finally, in the fall of 1970, Armstrong came back to my listening range in the evening shift at Buffalo's WKBW. In spite of the poor quality of the WKBW signal in Toronto, I became a regular Jack Armstrong listener until his departure from 'KB in February 1973. Thirty years would pass before I again heard Armstrong on the air again, when he returned to 'KB (now WWKB) as the station made a valiant attempt at reviving the old gal. Ratings were dismal, and 'KB's music era faded forever into the ether with a switch to talk in February 2006.

Jack Armstrong, who couldn't find a decent paying radio gig after WWKB, died on March 23, 2008 after a fall at his home in High Point, North Carolina. On his My Space (a forerunner of Facebook) page, Armstrong described his mood as "crushed." And so was I when the news of Jack's death broke. For me, it was the day the radio died. So thanks Jack, for providing some of the greatest Top 40 radio ever heard, and for your passion for the medium and rock 'n' roll music. Nobody did it better.